Fire has long played a vital role in the forest lands throughout the United States.  Many natural communities actually require fire to maintain themselves, not only influencing the collection and distribution of the vegetative components but the associated native wildlife species as well.  The ecology of fire on natural systems is based on the fact that fire is neither destructive nor constructive; it basically induces change.  This change is the continual process that is responsible for maintaining healthy and vigorous habitats thus the need for prescribed burning.

Early Native Americans understood that controlled use of fire and its capacity of change could be of great benefit when used properly.  While the fire helped them maintain open woodlands and eased their access through forests, they also realized its benefit to wildlife as the periodic fires traveled their landscapes.  Fire provided a low labor tool that cleared unproductive under-story vegetation and invigorated the propagation of early successional plants, which in turn, attracted deer, turkey, and a variety of other species for them to hunt.  Early cattlemen took note of this practice and commonly set fire to their pastures to maintain high quality forage for their cattle and assist in clearing encroaching woody plants from their pastures.

Modern day habitat managers are well aware of the benefits of prescribed burning, just as their earlier counterparts, but this knowledge of prescribed fire is now much more involved.  Just as the name implies, prescribed fire is delegated to the landscape though a well-planned prescription.  Just as a doctor’s prescription for an ailment, this fire prescription involved identifying the target tract to burn, the required climate parameters and establishing the desired management objectives to accomplish.  The objectives can be for reducing hazardous woody fuels, reducing the risk of wildfires, preparing sites for tree planting, managing hardwood competition, controlling unwanted insects and plant diseases, improving access and appearance, improving forage quality and enhancing wildlife habitat.  Following the goal(s) establishments, a fire prescription can be developed to attain the desired management objectives. 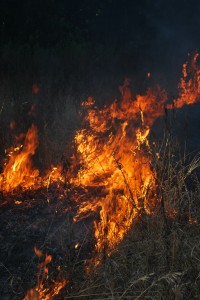 The intensity and effect of a prescribed fire is determined by the climatic and environmental factors that are present as the fire takes course.  Competent land managers develop fire prescriptions that require these factors to be within certain parameters in order to attain their objectives.  Numerous variables including temperature, relative humidity, type of fuel, fuel moisture, ladder fuels, wind speed, dispersion index, surface and transport winds are among the factors to consider prior to even lighting a match.  This is the reason that most states require some sort of training in prescribed burning prior to allowing an individual to practice this management activity.  Along with the benefits of prescribed burning comes the associated liability that stems from poorly executed fires.  For this reason, some landowners prefer the use of professional private land management consultants that are certified prescribed burners and have years of experience thus reducing the amount of risk involved.

The frequency of prescribed burning has a substantial impact on the native flora and fauna.  Prior to European settlers, the piney woods of the Southeast were subject to fire from natural causes, in the form of lightning, approximately every 2-7 years.  Some habitats may take several years to build a sufficient layer of fuel to effectively carry the fire.  Many landowners mimic this natural sequence and find that it suits their management needs.  In areas of more fertile soil conditions, it may be necessary to conduct more frequent burns to set back plant succession to a more desirable pace.  In the reverse, areas with poorer soil conditions may require less frequent fire return intervals.  In areas managed for bobwhite quail, it is not an unusual practice for managers to conduct annual prescribed burns to maintain open grassy habitats.

Timing of the fire, or rather the time of year when the burn is conducted is another factor that highly influences the outcome.  On tracts of land with heavy fuel loads there wouldn’t be much disagreement among landowners to conduct cool-season (Fall/Winter) burns to safely reduce the fuel loads.  Under these conditions, backing fires are usually used to slowly creep across the forest floor.  A back fire is created by allowing the fire to burn into the wind.  By burning into the wind, the fire is not allowed to get a “full head of steam” and thus just slowly and deliberately consumes the forest litter layer without causing damage to the standing timber or undergrowth.  The consistent wind patterns during this time of year provide dependable fire travel direction and the cool temperature lessens temperature stress to the timber stand.

However, in response to recent research, many wildlife biologists and land managers have begun incorporating growing-season burning into their comprehensive management plans once fuel levels are reduced.  Invasive woody species, such as sweetgum, are controlled much more effectively utilizing fire during the warm-season.  Unfortunately, there will likely be an incidental number of nest losses to ground nesting birds such as turkey and quail.  But, the habitat enhancement to the overall landscape overstates the negative aspects of this management practice.  In respect, ground nesting species will frequently re-nest following nest loss, and the improved habitat stemming from the introduction of warm-season fire, will provide optimal nesting and brood cover in subsequent years, which will aid in offsetting the original nest losses.  The frequency of growing season burns should remain within the 2-5 year cycle.  Professional experience is essential in conduction prescribed burns under this category due to numerous factors including higher ambient temperatures and the lessened predictability of fire behavior.

Regardless of the time of application, firebreaks provide a necessary means of containing the fire within the targeted burn tract.  Natural barriers in the form of streams, impoundments, bluffs, roads, and areas of bare soil can serve as functional fire breaks.  Some state forestry agencies or private consultants provide heavy equipment for this task utilizing a bull dozer with a firebreak plow.  Although quite effective, they leave a deep trench that should be pulled back and leveled following the fire to avoid any erosion issues.  A simple 3-point hitch disk on a farm tractor can also provide excellent results.  Innovative managers establish permanent firebreaks and maintain them with farm tractors by planting warm and cool season plantings, which can easily be tilled, exposing bare soil, when that particular tract is scheduled to burn. 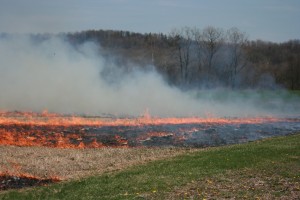 As with any land management practice, accurate records are crucial in determining your success.  Large aerial maps are easily attained and should be used to construct burn management parcels for your tract of property.  Accurate data on burn dates, vegetation present before/after, climatic conditions, burn permit number, and personnel present are a few examples that should be collected and filed.  This data is not only helpful in determining the success of you management but may assist you in avoiding liability that may have been caused by another fire.

Dollar for dollar, the utilization of prescribed burning produces the most cost-effective means for manipulating wildlife habitats.  And when performed correctly can provide a landowner a multitude of benefits.  However, a great deal of responsibility falls at the feet of the prescribe burner.  Responsibility to the property, wildlife, and also neighboring communities must be considered before burning.  Please seek the advice of a qualified burning professional before undertaking this management tool alone.  As the old saying goes, “an ounce of prevention is worth a pound of cure!” 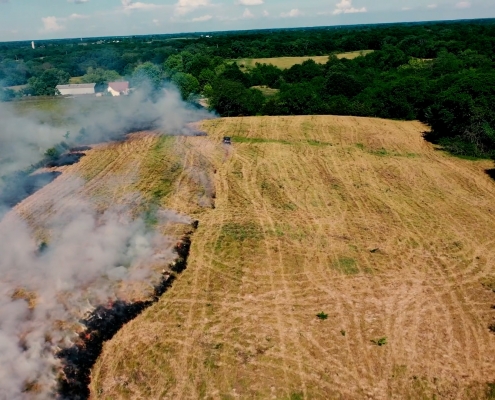 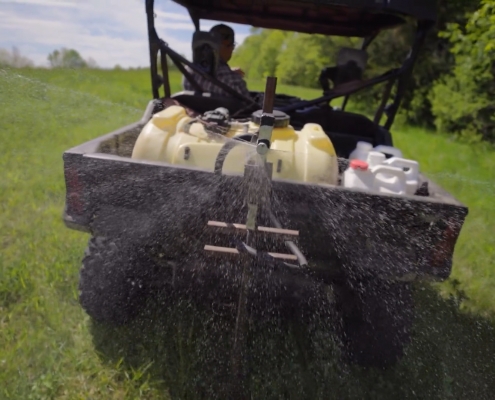 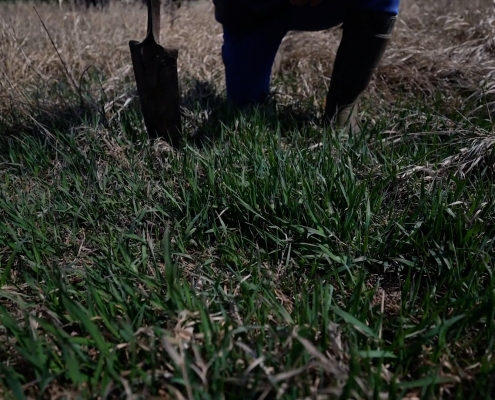 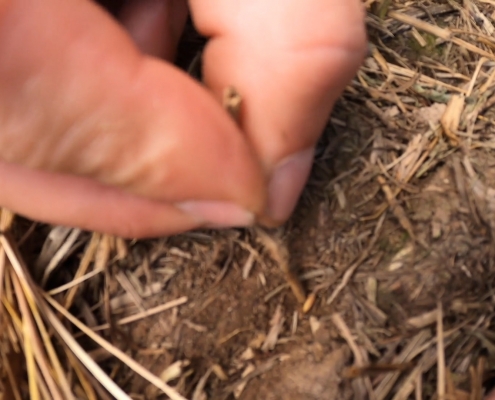 The Future of Deer Management
Scroll to top
Improve your land for wildlife by subscribing to our latest videos!
Subscribe
×